A letter from our dear friend, investor, and club member…

As some of you know, having watched me spill my wine at the tasting table, I have been battling Parkinson’s Disease for 17-years; I also have dear friends who are bravely fighting Multiple Sclerosis. Therefore, to raise money for the Parkinson Foundation of the National Capital Area (PFNCA) and the Multiple Sclerosis Society Research, on 23 June 2018, I am having an “Aviation Enthusiast RDVZ ISO the Parkinson Foundation and the Multiple Sclerosis Society.” It will be held at our beautiful Potomac Point Winery and Vineyard, where naturally we will have the finest of wines and gourmet food. To ensure an opportunity to visit with our three distinguished speakers the party will be restricted to 100 guests. My three friends with extraordinary flying careers will give short talks and then sit and simply visit with participants at the various tables. Hope you can make the party and please invite your friends and tell them those who buy a ticket, automatically are invited to my famous “Friday-After-Thanksgiving-Burning-Man-Party!” To buy tickets or donate, just open the Flyer and “CLICK Here to Buy Tickets or Donate.” Any questions: ParkiRDVZ@gmail.com or juanparon@gmail.com

(1). Commander Paul Galanti, USN, who I numerically replaced in the “Black Diamonds” when Paul was shot down on his 97th combat mission flying his A-4 Skyhawk from USS Hancock. Shot down and captured on 17 June 1966, Paul was held as a POW and beaten and abused for seven years. Maybe that is why Paul loves life like few others; he is one of the truly upbeat people in this world. In captivity, Paul was on the cover of Life magazine as he sat in his prison garb fresh from a beating, never surrendering, and pointing at the floor with his two middle fingers. Paul is a real American hero!

(2). Captain Bill Readdy, USN, was my Air Operations Officer on USS Coral Sea, while I was Air Boss. Bill transferred into the Naval Reserve to join NASA. At NASA, he served in numerous roles including NASA Director of Operations, Star City, Russia, where he implemented activities and fostered cooperation in the first, critical phase of the international space station partnership. As a NASA Astronaut, Bill flew the shuttle multiple times and logged 672 hours in space. Bill commanded his third flight, docking space shuttle Atlantis at the Russian space station Mir in 1996 and overseeing the first exchange of American astronaut researchers living aboard the Russian outpost. Bill became the first manager of Space Shuttle Program Development, charged with upgrading the space shuttle. Then Bill served as Associate Administer NASA HQ Office of Space Flight, where he led a $6 billion-a-year enterprise comprising five major programs, four field installations (Marshall, Kennedy, Stennis, and Johnson Space Centers), and more than 40, 000 civil servant and contractor employees. His oversight of International Space Station, Space Shuttle, Space Communications and Space Launch Vehicles seems particularly interesting to me! Following the tragic loss of space shuttle Columbia in February 2003, Bill chaired NASA’s Space Flight Leadership Council, overseeing the agency’s recovery from the accident and the shuttle’s successful return to flight in July 2005.

(3). Captain Greg “Dance” Wooldridge, USN, was my favorite wingman when I Commanded the “Checkertails” and we flew Adversary/Aggressor air-to-air combat training (“Topgun”) for the USN, USAF, USMC squadrons plus top flying units of the Japanese Air Force; South Korean Air Force; Singapore’s Air Force; New Zealand’s Air Force; and the Australian Air Force. Following his time in my squadron, Greg went on to command his own squadron F/A-18 fighter-attack squadron and then, because of his extraordinary airmanship, Greg was selected to lead the Navy Flight Demonstration Squadron, the “Blue Angels.” Greg led the 1991 to 1992 Blue Angels and in September 1992, “Boss” Wooldridge led his blue and gold F/A-18 Hornet team to perform in Russia and seven Euro-Asia countries on the first flight demonstration tour by a western squadron in that region. Following his first assignment with the “Blue Angels,” Greg was selected for Major Command and while conducting pre-command training, he received a call—in the middle of the Blue Angels 1993 season—from the Chief of Naval Personal relaying that the Chief of Naval Operations needed Greg to retake command of the Blue Angels. Greg was able to take command of the Blues mid-season 1993 and turn it into another magnificent season. After leaving the Blues for the second time, he took command of his new Major Command and turned NAS Lemoore, the Navy’s largest Air Station, into a Presidential Award-winning Naval Air Station and Master Jet Base. Six months from completing his Major Command tour, Greg was asked a third time to take the helm of the Blue Angels; it was during the Blue’s 50th anniversary season. Greg got the Navy’s demonstration team back up on the step in less than two weeks. Across the Naval Aviation community, it was recognized that Greg’s led team produced better flight demonstrations than the world had seen in two years. It was the 50th anniversary of the Blues—and except for Greg’s magnificent effort—it could have been their last. A wonderful memory for Dance was when his 6-year old grandson was in the audience at one of the shows and with his GRANDFATHER taking flight he was recorded shouting “Go papa go!” 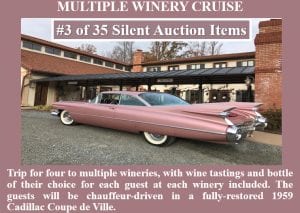 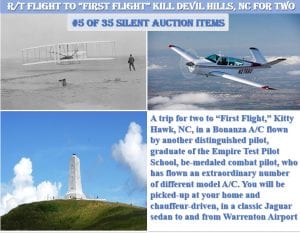 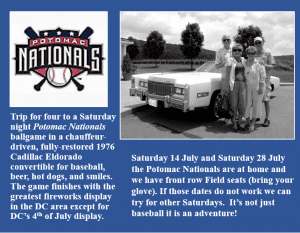 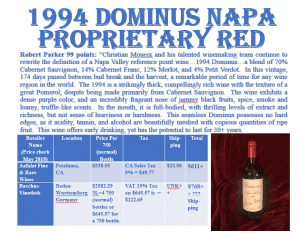 The menu has been set and will include carefully selected matching world-class wines:

OK, I forgot! But lots of great waist-wasters

All three of these Distinguished Aviators have stories to tell, are fun to talk to and are simply a joy to be around. Our Silent Auction will have terrific items a couple are listed above, just contact me if you want to see more Silent Auction items.

Thanks for your support of these two great charities! Please remember, we individuals with P.D or MS do not want pity. We want SPERANZA (“hope” in Italian), which is provided by the Parkinson Foundation NCA and MS Society Research.